Thank you for taking the time to visit this public consultation website.

This website gives you the chance to view our client, Oakford Homes’, plans for the redevelopment of land at Roseacre, Banstead with 12no 2, 3, 4 and 5-bedroom homes. Oakford Homes are proposing to submit a planning application at the end of November 2021 and you can help shape our emerging scheme by providing us with your feedback. Please take your time to look through the proposals and complete the on-line comments form.

It is the intention of our client to deliver a well-designed residential development that would reflect the character of the local area largely. Specifically, the proposal would comprise: 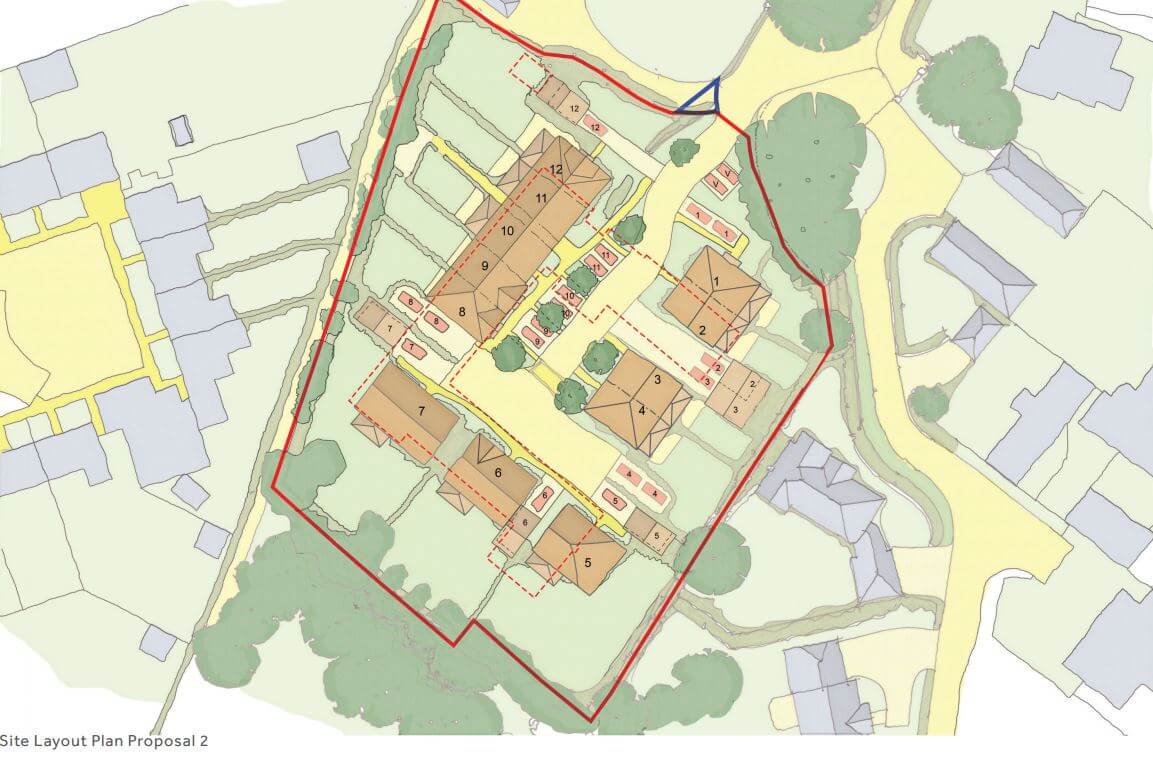 Oakford homes is a privately-owned medium sized house builder based near Beaconsfield, Buckinghamshire that provides quality homes in the South East of England. Some of the company’s recent developments can be found in aspirational locations such as Chichester, Henley-on-Thames, Midhurst and Beaconsfield. They are also currently in the process of delivering new developments at Chipperfield and Maidenhead.

You can learn more about Oakford Homes and its approach to the delivery of new homes at www.oakfordhomes.co.uk.

The site is an approximate 0.5ha parcel of land which currently comprises a now vacant care home facility along with its associated curtilage, access and parking. The site is accessed via a gated cul-de-sac which forms the southern end of the road known as Holly Hill Drive. The site lies towards the southern extent of the urban area of Banstead.

The existing care home building is part 2/ part 1 storeys – the main body of the building is two storeys but with two single storey wings. The site has been sold by the care home operator due to the dated nature of the buildings (which means it no longer meets CQC standards) and its strategy to reinvest any revenue from the site into its other facilities elsewhere, specifically Roseland at Garratts Lane in Banstead. The site is therefore now vacant.

Due to the existing buildings on the site, it would be considered to be brownfield (previously developed land or PDL). It then lies within the settlement boundary of Banstead, albeit on its southern edge. The southwest boundary of the site then adjoins woodland which is within the Metropolitan Green Belt and designated as an Area of Great Landscape Value (AGLV). It does, however, fall outside of both of these designations.

The site is in an existing residential area, lying to the south of the mid-20th Century properties along Holly Hill Drive and adjacent to the newer Holly Hill Park to the east. Holly Hill Park is characterised by large, detached houses and a predominance of mature planting and trees. All of the houses adjacent to the site were built in the last 20 years in the former grounds of Hollyhill House which itself has since been converted into nine apartments.

The site has good levels of accessibility, lying within 750m of Banstead town centre and the range of shops and services within. It is also within 1km of Banstead railway station.

The project team received a positive pre-application response from Regiate and Banstead’s planning department on 7th October 2021. The Council offered supportive comments in respect of the principle of redeveloping the site for residential use and provided detailed advice on the design of the proposed development which has been reflected in the scheme subject of this current consultation.

In respect of the loss of the care home facility the Council identified that its loss would be justified if the circumstances set out at Policy DS7 of the Local Plan exist, that is that adequate alternative provision is provided locally, or evidence is provided that there is no longer a need for the facilities, or it is not viable for continued care home use. Due to the condition of the building and former operator’s plans for reinvestment elsewhere it is proposed that both circumstances would apply. These circumstances have been discussed with the Council with no objection raised.

Following the public exhibition, the Council’s more detailed advice will be reviewed alongside comments from local residents and positive suggestions for change will be incorporated into the design.

On this basis, Oakford Homes’ propose to submit a planning application for the proposed development at the end of November 2021, following any changes to the proposals that are considered necessary in response to comments received during the current public consultation exercise.

Please see below a link to download the presentation boards displayed at the exhibition which contain additional details and plans of the proposed development: